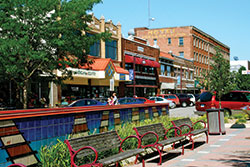 The conference will be held in Ames, Iowa, May 13–17, 2013 (Monday through Friday). Located in the heart of the American Midwest, Ames is easily accessed through the Des Moines International Airport located roughly 35 miles away. Ames is conveniently located along Interstates 35 along Highway 30. As part of your trip, take in the various cultural sights and some of the best food in the world.

Ames was founded in 1864 as a station stop on the Cedar Rapids and Missouri Railroad. It was named after 19th century U.S. Congressman Oakes Ames of Massachusetts, who was influential in the building of the transcontinental railroad. Ames is the home of Iowa State University, the closely aligned U.S. Department of Agriculture's National Animal Disease Center, and the main offices of the Iowa State Department of Transportation. Other area employers include a 3M manufacturing plant; Sauer-Danfoss, a hydraulics manufacturer; and Barilla, a pasta manufacturer.

Ames has a population of around 60,000 people and the 2012 Fall Semester enrollment was record-breaking with student enrollment topping 31,000.

The conference proceedings will be published electronically and in printed format after the conference. All articles will be free to read and to download as soon as they are published.

Manuscripts should be submitted by Monday, September 9, 2013. Guidelines and templates for the preparation and submission of contributions will be available on the conference website.

Conference talks will take place at the Memorial Union on the Iowa State University campus in Ames.

Ames is served by the Des Moines International Airport (DSM) in Des Moines, Iowa. The airport is located approximately 42 miles, or 45–60 minutes, from Ames.

The conference is coordinating shuttles from the Des Moines International Airport to the Memorial Union in Ames. The fee is $65 per person and does include roundtrip shuttle from/to the airport. If you wish to arrange this shuttle service, please purchase the shuttle fare when you register for the conference. Visit the Shuttles page for more information.

Local transportation to the conference site is not provided by the conference, however there is a university/city bus service called CyRide that provides convenient departure times. View the schedule and route at www.cyride.com. 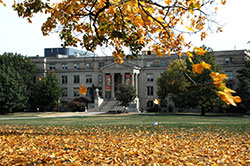 Directions to Ames from the airport

The average high temperature in Ames in the month of May is 73 degrees Fahrenheit and the average low is 50 degrees Fahrenheit. It tends to be rather windy in May and rain is somewhat common during this time. We recommend you dress in layers and be sure to bring a jacket especially for evenings out.

Department of Physics and Astronomy — www.physastro.iastate.edu